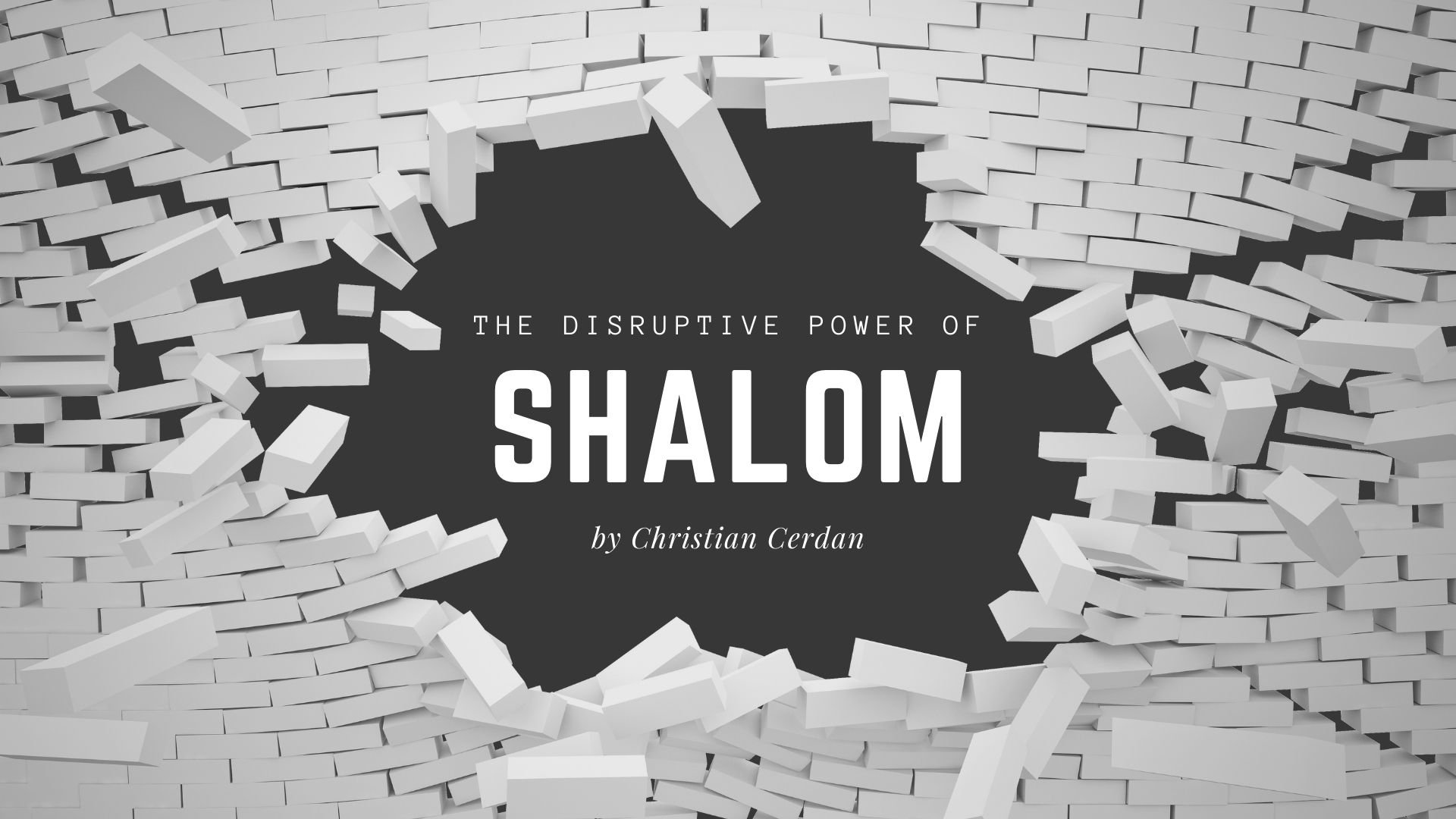 The Disruptive Power of Shalom

When you hear the word peace, what comes to mind? What do you feel? For awhile, I thought to be peaceful meant to be timid, passive, quiet, or shy. A few years ago, someone gave me their business card. On the back of it was written the ancient Hebrew letters for the word Shalom, which is what we have come to interpret as peace.

Ancient Hebrew language was pictorial in nature meaning each letters in their alphabet were expressed in pictures. So to communicate what they mean, they would have to find a series of pictures and place them side by side. That’s how they formed their words.

Visual before letters.
Expression before logic.
Meaning before words.

Let’s break down the word Shalom in its pictorial meaning. Because for Ancient Israel, their understanding of what peace means might come to a surprise. I know it did for me.

The word Shalom is made up of four symbols in ancient Hebrew.

When you put it all together, Shalom literally means to destroy the authority that establishes chaos.

How powerful is that?!

For them peace is active, it moves, it has an energy and vitality, it has vigor, it has power to disrupt and destroy. It doesn’t run away from conflict, rather it runs towards it.

As time passed, the meaning of peace changed to wholeness or completeness where there is harmonious relationship between two entities.

In the Greek, the word for peace is ‘eirene’ or ‘eiro’ meaning ‘to join’ or ‘to weave together’.

If you put the two words together, ‘eirene’and ‘Shalom’, we can find a whole new meaning of peace. It becomes this energy, this spirit that destroys the authority that causes disunity and dissonance, but also brings you back to right relationship, the right way of living in a more harmonious co-existence and interconnectedness and interdependency.

When you think about the cross, a tool that the Romans used as a torturing device, has now become a symbol of hope.

That was peace at work.
A disruption of definition.
A reformation of meaning.

So when Paul says that Jesus has become our peace, those two realities are at work in Him. He who made both the Jews and Gentiles into one and BROKE DOWN the barrier of the dividing wall of hostility through the cross.

There was a breaking, but also there was a uniting.
Peace is a double-edged sword.
It cuts as it heals.

And He is still doing that today. Here’s what I see the Lord doing as we anticipate the new year.

The Lord is coming as the Prince of peace BREAKING DOWN any barrier that wants to establish itself as a wall of separation in you but also in one another. What was once a place of chaos will actually be the birthplace of possibility and strength and creativity and fruitfulness and redemption.

I feel a grace that’s being released this year for the disruptive power of God’s peace. The peace that destroys the authority that establishes chaos, but also the peace that bring things together.

Because there can be no transformation without disruption.